The trade in fossils: a practical position

I’m just back from a trip to the 2015 Tucson Rock and Mineral Fair, probably the largest commercial fossil fair in the world. I was there in my professional capacity, representing the museum along with my colleagues Martin Munt (our Head of Palaeobiology Collections) and Emma Bernard (our fossil fish curator). The museum has been sending mineralogical delegates to the show for many years whereas the palaeontologists have only been attending regularly for four years or so. This was my second time at the show. 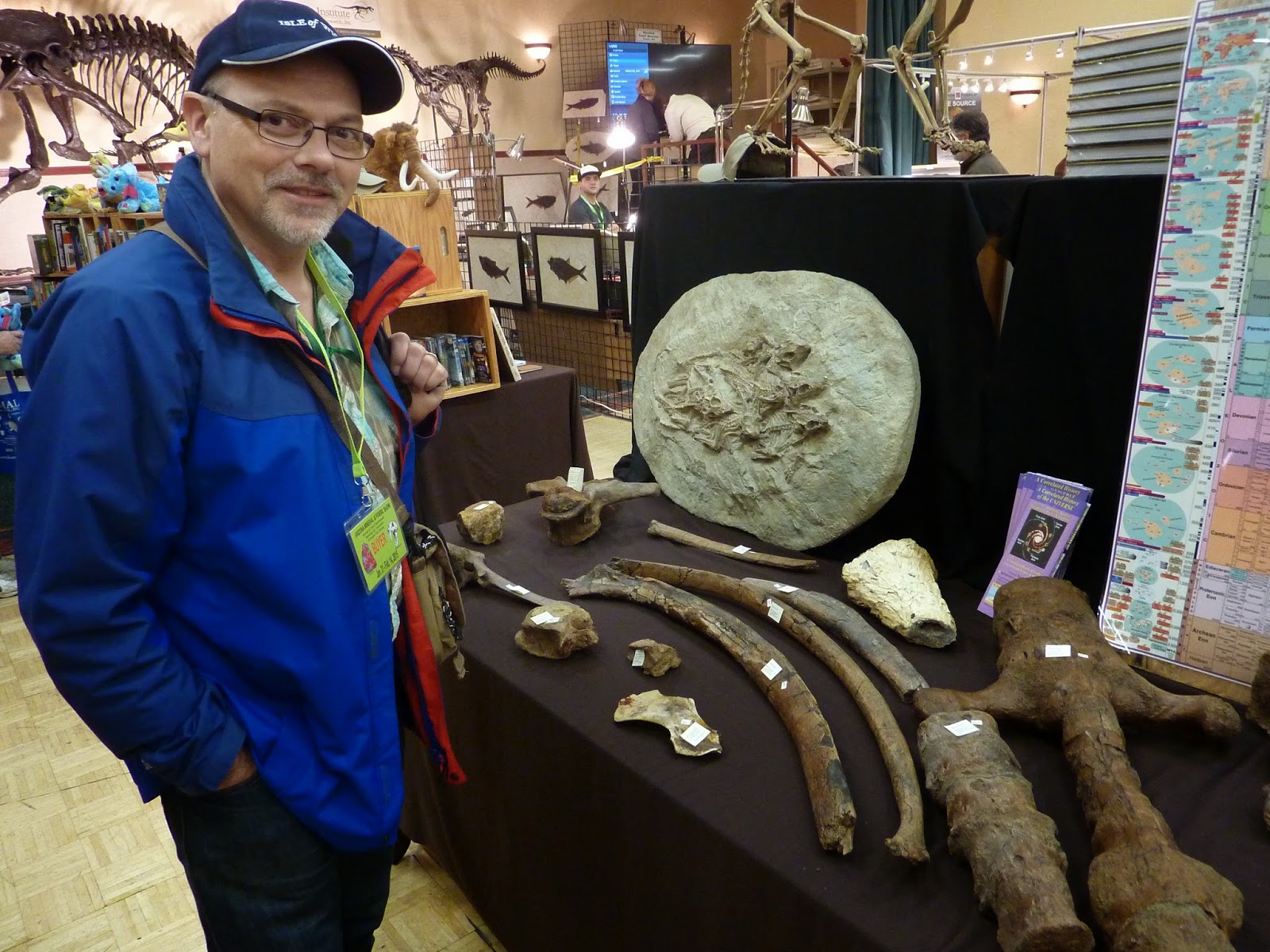 The logistics are impressive – the fair goes on for almost a full month and takes over much of Tucson. The fossil part of the fair covers several main sites (centred on hotels, giant marquees in convention centres, etc.) and there are numerous satellite shows that are set up in car lots and motels. The importance of the fair to the city is clear, from the numerous permanent rock shops in the city itself, to the large number of commercial dealers who live nearby and even in the murals on some of the town buildings. The palaeontological part of the fair forms only a small proportion of the total activity – most of it is devoted to rocks and minerals.

We were attending for two reasons: to purchase fossils and to maintain and develop our network of professional contacts within the legitimate fossil dealing trade. Many of my colleagues are strongly opposed to the buying and selling of fossils (more on that later), but museum policy at the NHM has always been to engage with professional fossil dealers with the aim of bringing scientifically important specimens into the public trust so that they can be cared for and studied in perpetuity. When purchasing a fossil we have a number of important criteria in mind: 1) Was the fossil collected legally and ethically; 2) Does it come with the relevant contextual information on geology and locality?; 3) It is scientifically significant?; 4) Does it add something else useful to our collection (does a fossil represent a taxon or locality our collections don’t currently include)?; and 5) Does it have potential for public engagement (i.e. exhibition, educational outreach, etc.).

Colleagues that oppose trade in fossils have good reasons for doing so. Some have a strong philosophical perspective that fossils are part of humanity’s shared cultural property and regard trade in these objects as infringing that ideal. Others have more pragmatic concerns: some unscrupulous fossil dealers have looted and severely damaged important sites; others have engaged in unethical and illegal practices in the excavation and import/export of material; in many cases dealers have not collected important contextual information; and this practice has placed a monetary value on fossils. The latter is particularly pertinent to rare or spectacularly preserved fossils that may, therefore, sell at prices that prevent museums and other academic institutions from obtaining them: more than a few really nice fossils have disappeared into the mansions of wealthy private collectors, never to be worked on by scientists. All of these are legitimate concerns, which I share, and all of my colleagues (myself included) could list examples where the subject was not served well by the fossil trade.

However, there are also good reasons for engaging with professional fossil collectors rather than casting them as pariahs, as some of my colleagues often do. Firstly, there are simply more fossils than palaeontologists: if it were not for professional collectors (and they devote much of their time to this activity, not for the few weeks a year most palaeontologists can manage) many interesting fossils would simply never be found or erode away in the field. Thus, in some sense, a careful professional collector who records all of the relevant information and makes it available is doing the subject a service in recovering this material. Secondly, a constructive dialogue with professional collectors, such as discussing with them what information is important, can lead to collection practices that really enhance the information available. Indeed, many commercial collectors are often happy to take scientists into the field to see their sites and make observations. Thirdly, most of the commercial collectors I meet really care about their material – they can discuss it in detail and often aspire for it to go to museums and to be studied. They excavate it and prepare it to a high standard (its in their interest after all, they want to sell them) and so often produce really good material for study and exhibition.

There is an important flip side to this: as a community we should definitely not engage with those collectors that do not have the highest legal and ethical standards, nor with those who do not provide the necessary contextual information. There is evidence that this engagement and intervention is working: after the high profile Tarbosaurus trial, which led to the jailing of one fossil dealer and the repatriation of material to Mongolia, it’s obvious that the trade in this kind of material has dwindled. When I first visited Tucson a number of dealers exhibited Mongolian (and Chinese) material, but specimens from both countries were conspicuous by their almost total absence at the fair this year, a trend that I’m sure will continue. This is a phenomenon that was brought about by high profile community pressure (both from palaeontologists and from ethical dealers), rather than any change in legislation.

There are other nuances in this debate that are often glossed over but are worthy of discussion. If fossils are viewed as cultural or heritage objects, why is it OK to trade in antiques and old masters? These are also of great communal benefit and are limited resources. Some laws protect art, antiquities and anthropological artefacts from sale, but fossils are generally excluded. If palaeontologists want laws to try and get protected status for at least some fossils, discussions have to take place on how this might best be done and international agreements (not just national ones) have to be put in place. Also, many museum collections around the world are built partially on the purchase of material from professional dealers or private collections. For example, the NHM collection includes material purchased from Anning, Mantell, Nopcsa, the Sternbergs and Cutler, not to mention Archaeopteryx. Many North American museums include numerous specimens that were also purchased historically (e.g. AMNH, USNM, ROM, Field Museum), often with less locality information than a modern dealer would provide. Even those museums who claim to have ‘collected’ large numbers of specimens often engaged professional fossil hunters on their pay roll to do so (which is not really that different from buying from a dealer - the scientists themselves rarely went into the field on these expeditions for any significant length of time). Thus, there is a certain amount of hypocrisy in terms of condemning the sale of fossils, when this trade has actually formed the foundation of many major collections. Some of my colleagues have even opined that they would rather see specimens left to rot in the field than have them collected by a dealer (where there would be at least a chance they’d make it into a public collection), an attitude I find astonishing. Finally, let’s not forget that we are also talking about people’s livelihoods – in some parts of the world fossil collecting provides a much needed boost to local economies and provides jobs for numerous workers and there are many interesting conversations to be had on this theme alone.

In this case I think the subject would best be served by a large dose of pragmatism. The subject can benefit strongly from good relationships with those dealers that collect and prepare material to high ethical and professional standards, whereas the community should work together to exclude those that do not.