How to buy a dinosaur

Following from my previous post on buying and selling fossils, here's the text of a piece I wrote at David Hone's invitation for his blog hosted by The Guardian, for any that missed it:

Taking delivery of a dinosaur skeleton is not an everyday event – even at the Natural History Museum (NHM). So, when the opportunity arose to obtain a spectacular new specimen of Stegosaurus, the museum embarked on a project that took nearly two years from its conception to the appearance of this iconic dinosaur centre-stage in our Earth Hall. Elsewhere, I’ve talked about the original discovery of the specimen, and the skeleton itself, but here I’ve decided to give an insight into how and why the NHM acquired it. 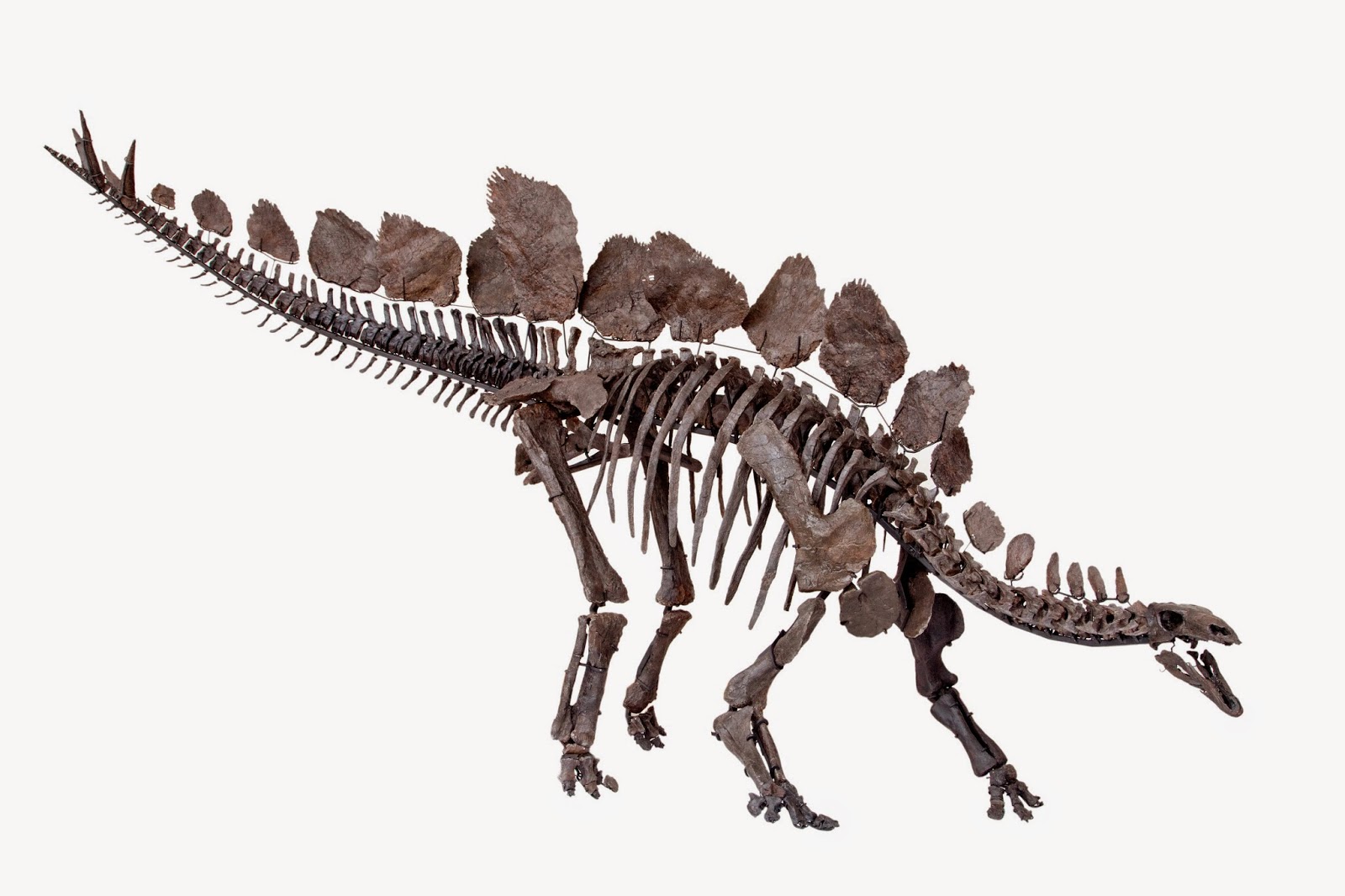 We first heard about the Stegosaurus when my colleagues Martin Munt, Tim Ewin and I attended the Tucson Rock and Mineral Fair in early 2012 – an annual event that is the largest commercial fossil fair in the world. During the fair, professional fossil collectors and dealers from all over the world buy and sell everything ranging from tiny trilobites to mammoths, exchanging information with each other and with professional palaeontologists. Buyers include retail outlets, private individuals and museums. While searching through the displays for interesting new material, we were impressed by a full-sized cast of a Stegosaurus and were surprised to learn that the original was for sale. Further discussions revealed that not only was it available, but also the best skeleton of this amazing dinosaur yet found. It had been discovered in 2003, by fossil collector Bob Simon in the Late Jurassic rocks of the Morrison Formation from Red Canyon Ranch, near Shell, Wyoming, and had been excavated and cleaned of its surrounding rock by a, Swiss/German team of professional fossil collectors headed by Kirby Siber of the Saurier Museum Aathal in Zürich. The completeness and high quality of the specimen made an immediate impression in terms of its potential for new science and a new dinosaur display. On returning to the NHM Martin and I began discussions with our colleagues to determine how feasible a purchase might be, how and where we might display the Stegosaurus, how we could use it for education and public outreach and, most importantly, what new science would result if we were lucky enough to secure it.

Some palaeontologists strongly oppose the buying and selling of fossils for a variety of reasons. Many countries have laws that specifically prohibit trade in fossils, as they want to retain these objects as part of their own cultural and scientific heritage. However, unscrupulous dealers and collectors have frequently poached fossils from these areas, exporting and selling them illegally, often without the contextual information on the fossil site that is necessary to exploit the specimen’s full scientific potential. Moreover, some illegal collectors have also ravaged and severely damaged scientifically important sites. Nevertheless, these unlawful collectors are in the minority and many professional fossil collectors and dealers have strong, positive relationships with museums and universities, and often collect to very high professional standards. Since its foundation the NHM has been strongly engaged with both amateur and commercial collectors. One of our duties is to bring scientifically significant material into the public trust, which we do by collecting ourselves, encouraging donations and by purchase – as long as the material we acquire has been obtained in line the highest legal and ethical standards. By bringing these specimens into the public domain we can make new scientific information available, which would otherwise be lost, and enable access to the specimen for other scientists in perpetuity. Equally importantly, we also use these specimens to inspire generations of visitors to the museum who see the material on display in our galleries.

The benefits of obtaining the skeleton were clear and it was an easy sell to get the project approved internally – at least in principle. A trickier question was how to raise the necessary funds – the NHM does not currently benefit from a large endowment to support the purchase of new material for the collection, so a donor had to be found. Luckily, our fundraisers are a tenacious bunch and after a few months were able to propose the idea to a private individual, Mr Jeremy Herrmann, who generously undertook to be the lead donor on the project and to find other donors to help support the purchase. With his support we began the process of trying to acquire it. Colleagues and I went to view the original bones, in order to check their quality and authenticity, which involved urgent trips to Salt Lake City to see the skeleton (as it was in a facility there where the frame on which it is mounted was being built) and Zürich to see the skull (where the skull bones had been cast and moulded to make replicas). Once the relevant legal niceties had been checked and double-checked, NHM Director, Sir Michael Dixon, was able to pick up the telephone and make an offer that secured the Stegosaurus. After a few more weeks of waiting for the frame to be finished, the Stegosaurus arrived at the NHM in December 2013.

A decision was made to keep the purchase confidential, to maximize the impact when Stegosaurus was revealed to the public and to give us a reasonable period in which to study the skeleton in detail, something that would be exceptionally difficult after it went on display. Keeping a dinosaur skeleton secret for nearly a year is no mean feat. The small number of external collaborators we asked to join the project for their expertise were asked to sign binding non-disclosure agreements and I wasn’t able to talk about the work with my closest friends and colleagues. The scientific work we carried out behind the scenes involved CT scans, 3D laser scans and thousands of photographs and measurements, as well as preparing a full anatomical description. Perhaps surprisingly, Stegosaurus is a rather rare dinosaur and has not received vast amounts of detailed attention, so the new skeleton was an exciting opportunity to bring our knowledge of its anatomy and biology bang up to date. All of these data are currently being analysed and compiled into a series of scientific papers, which will appear over the next couple of years. The first paper, on Sophie's body mass, has now been published and can be downloaded for free from the Royal Society's Biology Letters webpage. However, the science was only a part of the project. During this time we also had to consider where the skeleton would go, do some additional cleaning of the skeleton and make some adjustments to the frame, plan the removal of the former exhibits in the area chosen for the Stegosaurus, design and build the plinth and lighting for the display, work on the display panels and web content, and devise education and outreach activities and events, alongside many other critical tasks – all while carrying out the work in secret alongside the other work each member of the team had to do on a day-to-day basis. A dedicated project manager, Beca Jones, was needed to oversee and guide the entire scheme and did a sterling job in keeping us all on schedule, on budget and with every contingency accounted for – and this for a diverse team of scientists, builders, educators, designers, conservators, fund-raisers and artists. 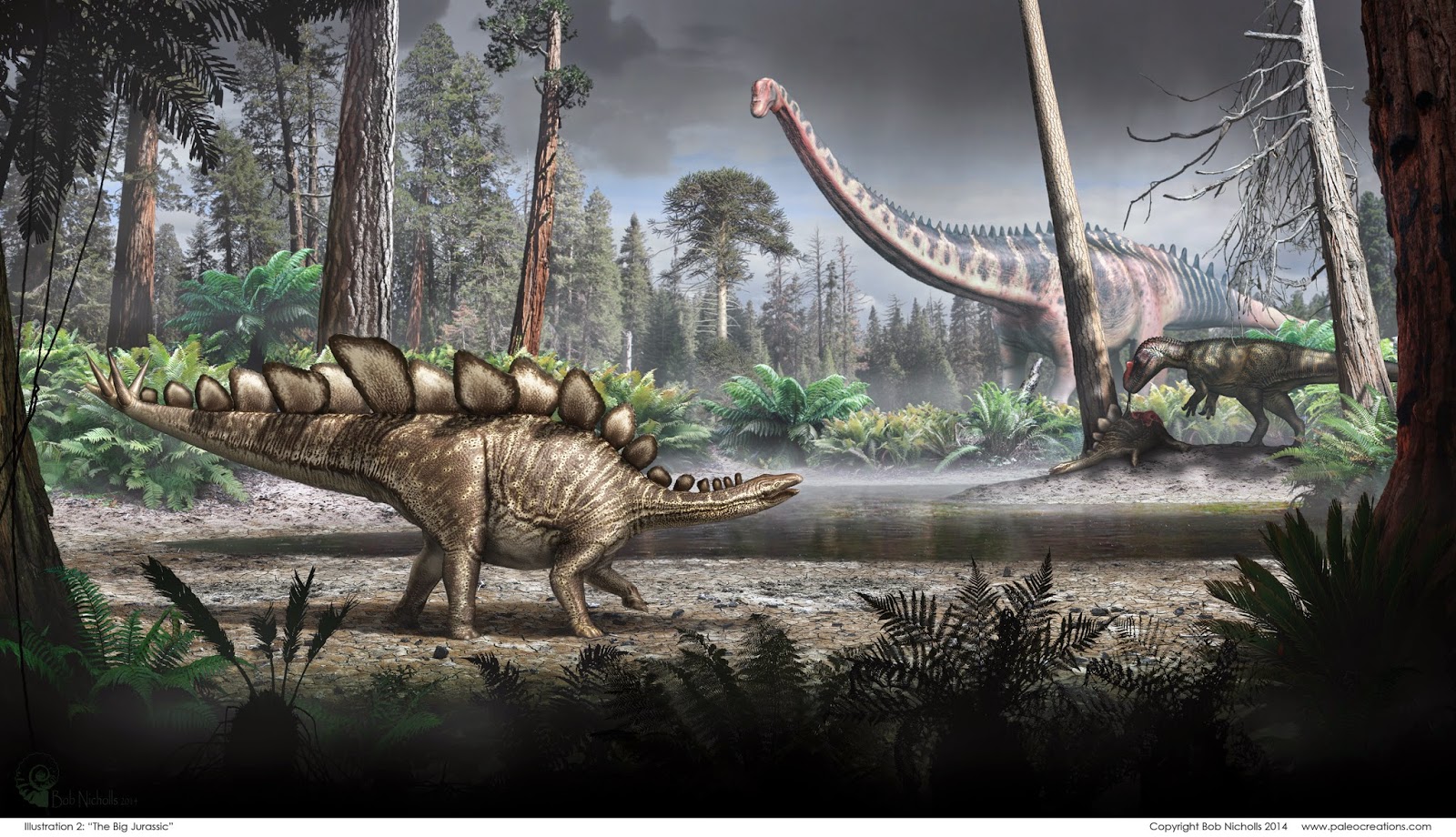 This massive effort, involving over 100 people in total, finally came to fruition in December 2014, when we unveiled the skeleton to the public. For me, this came with a mix of emotions, notably a massive surge of relief – we’d delivered the exhibition on time with no mishaps. Moreover, I could now talk freely about something that had occupied a substantial portion of my time for nearly two years! I think everyone on the team feels justifiably proud of bringing this fabulous new dinosaur to the museum – and Stegosaurus will inspire our visitors for decades to come as well as adding significantly to our knowledge of dinosaurs and their world.
Posted by Paul Barrett at 17:48 2 comments: