The past year has witnessed some remarkable new discoveries that have provided some amazing advances in our understanding of dinosaur biology and evolution. What follows is a list of the five papers that I found most interesting and/or useful in 2015 (modesty prevents me from including my own papers, of course). There may be some surprises here as, unlike some of my colleagues, I don't always find the latest new species announcements all that interesting - I tend to prefer conceptual papers that have a longer-term impact, rather than those new finds that grab short-term media attention. So, with that in mind, here are my top reads (in no particular order): 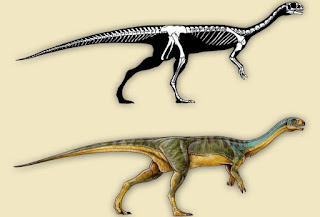 Reconstructions of Chilesaurus (image from http://www.vocativ.com/culture/science/chilesaurus-new-dinosaur/ courtesy of Gabriel Lío)

Although I'm primarily an ornithischian and sauropodomorph worker, this was -the- stand-out new species of 2015 in my opinion. A truly bizarre herbivorous theropod from the Late Jurassic of Chile, this animal has features of several distantly related dinosaur groups combined into one body. I was lucky enough to see the material before it was named, when visiting Argentina in 2013 and my host, Fernando Novas, teased me by showing me the specimen one bone at time. He showed me teeth and ankle bones that looked like those of a prosauropod, then vertebrae like those of a theropod. After I'd congratulated him on an interesting new fauna, he grinned and revealed that he'd been showing me bones from a single associated skeleton. Fernando and his team happily admit they're not particularly comfortable with Chilesaurus as a basal tetanuran, but regard this as the current best fit for the data that they have. My hunch is that Chilesaurus will eventually occupy a more derived position within Theropoda, but there are a lot of strange, primitive features in the skeleton. It will be interesting to see where Chilesaurus eventually comes to rest in the dinosaur tree.

2. Age of the Chañares Formation

The study of dinosaur origins has been re-invigorated in the past decade by the discovery and re-analysis of many Middle and Late Triassic taxa, as well as the recognition of a whole new clade of dinosaur relatives, the silesaurids. However, understanding the anatomy and relationships of these animals is only part of the story. Most of our knowledge of the earilest relatives of dinosaurs - including lagosuchids and silesaurids - comes from only two places in the world, the Chañares Formation of Argentina and the Manda Beds of Tanzania. Both of these formations have been widely regarded as Middle Triassic in age and this date has been used to constrain the timing of dinosaur origins. However, new work on the age of the Chañares Formation, by Claudia Marsicano and colleagues, used radioisotopic dates derived from tiny zircon crystals within the sediment to check this assumption. The new dates obtained by their team suggest instead that this classic 'Middle' Triassic locality is actually Late Triassic in age and, as a result, that the origin of dinosaurs may have taken place in a geological instant (a few million years), rather than over the more protracted timescale that's currently envisaged. Other teams around the world are now planning similar analyses of the sediments from various Middle and Late Triassic localities to see how good our assumptions over their absolute ages really are.

3. The interrelationships of ornithischian dinosaurs

A major new study by my colleague Clint Boyd has assembled one of the largest ornithischian phylogenies ever attempted. This paper includes a wealth of new character data and represents the first real advance in the area since the earlier efforts of Richard Butler, published back in 2008. Although some individual ornithischian clades have received abundant attention, the overall pattern of ornithischian evolution has been surprisingly neglected. Clint's work offers some new hypotheses on the relationships of major ornithischian lineages that have not been previously proposed (such as the exclusion of parksosaurs from Cerapoda) and also gives an interesting, robust framework for the first rigorous palaeobiogeographic study of ornithischians. Lots to digest here and this paper is likely to be influential for many years to come. 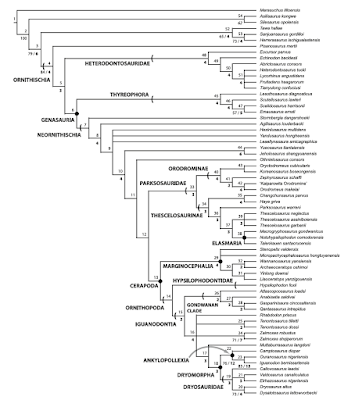 Clint's new phylogeny (Figure 2 in his PeerJ article) - some interesting surprises lurk within.

Several research groups around the world have been pushing at the envelope of what's possible regarding fossil preservation. These have included the discoveries of dinosaur muscle fibres, feathers, possible melanosomes (and their implications for dinosaur colour), and even the potential for biomolecular preservation. However, in almost all of these cases (the majority of which are fairly controversial, with more debate among specialists than media coverage suggests) the localities producing these exceptional structures are themselves exceptional - sites known as Konservat Lagerstätte, which have unusual geological characteristics that enable these types of preservation. However, Sergio Bertazzo and Susannah Maidment have provided convincing evidence of microscopic structures (blood cells, collagen fibres) in dinosaur bones from localities where such high-fidelity preservation was previously thought to be impossible. Their work suggests that there may be enormous future potential for studying even poorly preserved dinosaur material in much greater depth than ever imagined previously.

5. Phylogeny of the diplodocid sauropods

This paper truly wins the award for effort – a monumental specimen-by-specimen analysis of diplodocoid sauropods that formed part of Emanuel Tschopp's PhD dissertation.  Although this study gained media notoriety for resurrecting the name Brontosaurus (a conclusion that's being hotly debated, but which I have to admit some sympathy for), it's much more important than that. It provides an extensively documented set of new character data for these dinosaurs and is one of only a handful of phylogeny papers that really attempts to document and describe its characters for the reader. In addition, it is the only comprehensive evolutionary study of this bizarrre dinosaur clade and offers many new insights into the evolution of the diplodocoid body plan. This one will be a citation classic for sure.

There were many other insightful and interesting dinosaur papers in 2015, too numerous to mention here, and I look forward to what will surely be another busy year in 2016. Happy New Year everyone!
Posted by Paul Barrett at 08:55

Please leave your comments below...